Latics travel to Carrow Road hoping to replicate the result from the 2014/15 season when Kim Bo-Kyung grabbed an 8th minute goal that secured a 1-0 victory for Malky Mackay’s men, Gavin Ward was the referee that evening and he will be in charge for this game too.

Norwich are 11th in the table and on a three game winning run in the Championship, in Teemu Pukki they have a striker on form, the Finland international has six league goals so far and is expected to lead the line on Saturday keeping prolific Championship striker Jordan Rhodes on the sidelines.

Wigan Athletic, of course, are a team with momentum, picking up this season where they left off last term, great attacking performances and definitely a club on the up, Norwich, well the support at least, may feel they are entitled to beat ‘teams like Wigan’ but this will be a stern test for both clubs and a high scoring game could well be on the cards.

Latics have Will Grigg back in the squad after injury and the Northern Ireland international should start up front.

Both James Vaughan and Callum McManaman are available for selection after recovering from slight injuries. 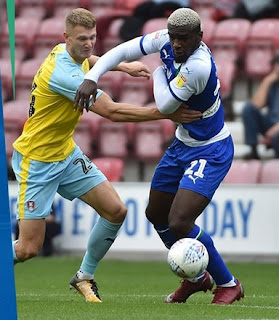 Norwich will see Teemu Pikku return to the starting line-up following his absence from the mid-week EFL cup game at Wycombe.

Kenny McLean, Ben Marshall and Onel Hernandez are all likely to miss out through injury. 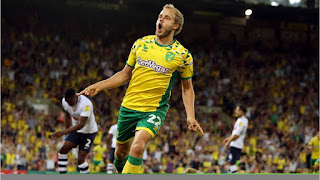 Latics and Norwich have met 13 times down the years

The first meeting was an FA Cup 4th round tie at Springfield Park, 3rd Division Latics knocking out top flight Norwich 1-0 thanks to a Paul Jewell goal.

Gavin Ward (Surrey) grab a look at our Meet The Ref article.

Can’t see anything but a 2-3 Latics away win!

They say you shouldn’t judge a team in a new campaign until at least 10 games have been played, well we will play our tenth game of this particular season on Saturday when we visit Carrow Road to face Norwich City. 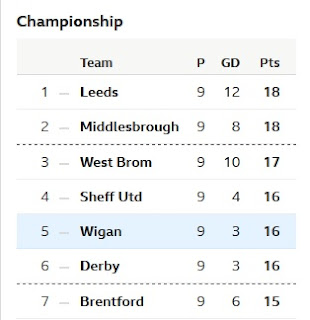 We have already accumulated 16 points in what has been a fantastic start, so after 10 games we will sit on at least that many, cast your minds back to the last time we were here in the Championship, no go on, I know you’d like to forget it but please humour me.

10 games in we met Wolves at the DW Stadium, beat them 2-1 to reach 8 points, so we will at least double that tally come 5pm Saturday, in fact we didn’t reach our current total in the 2016/17 season until we beat Huddersfield Town on the 28th November, though following that win we only managed 1 point from our next seven games.

In danger of becoming somewhat repetitive I cannot believe just how good we have been so far this season, when the start is looked at in context we can see how promising it is, the 2004/05 season which saw us promoted to the top flight had us on 19 points after nine games, we are within touching distance of that amount, though I’m not advocating that we all start getting carried away, I feel we are in for an exciting season ahead.

The proposed takeover of the club has been put back once again if reports from the Hong Kong Stock Exchange are anything to go by, I’m no expert but reading dates that jump out it looks like the 12th October could be significant.

Following the hullabaloo when the deal was first muted it has now turned into something of a matter of fact situation and it appears that the Latics support is quite blasè about it all, though I am sure once it does go through there will be a buzz of excitement and anticipation, roll on the 12th October, isn’t that the next international break? Well it will give us something to talk about.

This week the PWU Latics podcast was recorded live at the Beech Hill Book Cycle.

A great 10th episode of the season starts off with a reflection on the televised win over Bristol City, a game that saw two good sides cancel each other out was decide by possibly the one piece of quality of the game. 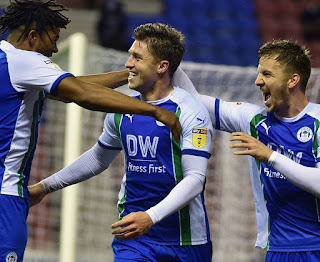 We have a very good interview with Josh Windass, who for some reason can’t quite bring himself to say that he is better than his dad, come on Josh, your dad’s nearly fifty!

We announce the winner of the Red Brick Design Springfield Park print before getting into the preview of the Norwich City game which include an interview with Dave Freezer who is  a Canaries fan and a local journo.

We have the customary ‘Meet The Ref’ and #ticspredicts.

Latics Legends XI left back is announced and the debate around who should the eight nominees for centreback throws up some compelling arguments.

We have a Swansea preview, seeing as they are in town on Tuesday, and finish with a tale from Adam about Kal Naismith, a Latics bath towel and a debit card, well I never.


Latics travel to Carrow Road on Saturday hoping to make it three wins on the bounce for the first time this campaign when we tackle Norwich City, the man charged with keeping the peace on the field of play is Surrey based whistleblower Gavin Ward. 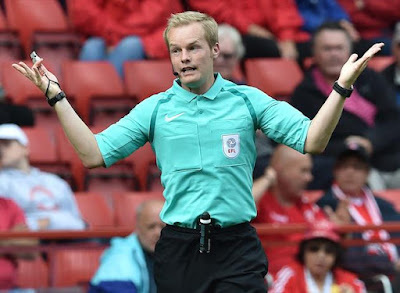 The 37-year-old official is in his eleventh season with the Football League having made his debut in August 2007 when Hereford United beat Barnet 2-1 at Underhill. This will be only the third Latics game that Ward has been in charge of, our 1-3 away win at Plymouth last season and – ironically – our 0-1 away win at Carrow Road against Norwich back in March 2015.

Gavin Ward’s 8 games so far this season have been unspectacular, no red cards handed out and with just 18 yellows being issued he appears to have become quite lenient.

His games have covered the Championship (5), League 1, EFL Cup and the Football League Trophy, Ward has already officiated at Carrow Road this season, Norwich’s 2-0 win over Preston dishing out four yellows, two to each side and awarding 29 free kicks 13-16 in favour of the home side.

Gav has taken a bit of stick off managers down the years, Bradford boss Phil Parkinson said of him in January 2015 following a League 1 game against Rochdale – ‘If that is the best referee we can get and we have brought him up from Surrey then God help us. That performance was shocking. He is the worse referee we have had this season.’

Whilst Bristol City boss Steve Cotterill commented on Ward back in March 2015 following defeat against Rotherham – ‘…there was no blame attached to any of our players for their second goal. That one is down to the referee.’
Also the same season AFC Wimbledon boss Neil Ardley couldn’t hold back with Ward doing him over again, awarding a very dubious penalty against his team for Cambridge United, he said – ‘There is previous with this referee, we’ve had him twice before and both times he has been controversial’

Hopefully there is nothing controversial going on at Carrow Road, unless it’s in our favour of course.

Latics line up for their third game in six days this evening when Bristol City are in town for the televised top end of the Championship clash.

Both clubs have had very decent starts to the new campaign and this promises to be another ding-dong clash between two sides that look to win games by going on the offensive.

Like the Latics, Bristol City will be playing their third game in six days and also like the Latics they have a win and a defeat from those two games, there is just a single point separating both clubs in the Championship table and the goals for and against columns show very similar stats. On paper this looks an evenly matched contest.

Storm conditions in Wigan for the day and forecast to carry on into the evening, hopefully the game won’t turn into a lottery, either way I’m hoping for a positive result against a club that historically we don’t do too well against.

Latics - Paul Cook has hinted at changes from Tuesday due to a couple of players carrying knocks, Callum McManaman faces a late fitness test whilst Dan Burn and Gavin Massey are definitely out.

Both Michael Jacobs and Darron Gibson, who came off the bench, looked good on Tuesday when returning from injury, Jacobs should definitely start the game whilst it would be difficult for Cookie not to pick Gibson in the starting XI now he is fully fit. 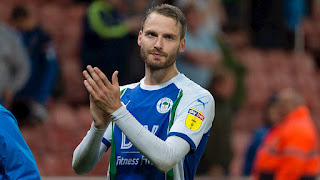 Nick Powell, Latics talisman is having a terrific season, again, with him in the team we are always going to create chances.

Bristol City – Robins boss Lee Johnson say that both Niclas Eliasson and Famara Diedhiou are pushing for starts after impressing late on in Tuesday nights defeat at West Brom. 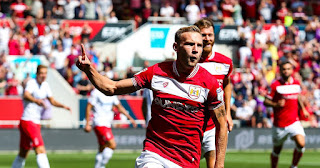 What The Bosses Say 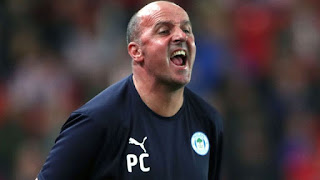 Paul Cook – "Any game under the lights is exciting and especially to come up against a side with the quality that Bristol City have.

"They're good form apart from their defeat to West Brom on Tuesday night.

"They showed their quality last season and had a tremendous cup run in the League Cup, but it probably caught up with them in the league in terms of pushing for a play-off place.

"I'm sure Lee (Johnson), his staff and the club will have aspirations of being up and around those places and when you watch them you can obviously see why.

"The games are there for everyone to see, it's fantastic to have two home games in a week and we're really looking forward to this.

"The test for every club is team selection and I'm sure Lee is in a similar position to us with lads who might miss out on the game through injuries." 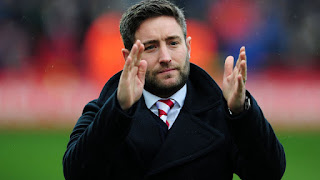 Lee Johnson – “The preparations are good”


“We are in a good run of form, apart from Tuesday of course, and I want us to continue that”

“I want us to continue to play the good stuff and snuff out a couple of the errors I saw, there weren’t many, there never are in this team because we’re a good group and they’re really good players that we can all trust are going to go out and give it their all.

“On a couple of occasions we fell short of that on Tuesday night and we got punished, so we have to make sure we do the basics very, very well, that we’re world-class at them and then naturally our quality should come out.”

I’m positive there will be goals again, two attack minded teams, poor conditions with the weather, tired legs due to 3 games in 6 days.

I will go for the obligatory 3-2 Latics win

Grab a listen to the latest PWU Podcast featuring a preview of tonight’s game.