On this week’s podcast we spoke with Leeds United supporter Professor Richard Parrish, he’s been a lifelong Leeds fan.

His early memories of meetings between to the two clubs are the FA Cup quarter final at Springfield Park in 1987, Leeds won that one 0-2, and also the 2006 3-3 draw at Elland Road, classic

When asked for a bit of insight into Leeds, Richard say’s - “If you can put Leeds under pressure you can really turn the crowd”

“Bielsa has been fantastic, an excellent coach who improves players, keeping Calvin Phillips has also been very important, he keeps Bielsa’s formation in games, playing just in front of the two central defenders, but he is suspended for the game tomorrow.”

“Ben White’s been terrific since he signed in the summer.”

“We’re also poor at converting chances, similar to yourselves, Bamford although top scorer is most guilty of this.”

Player to look out for? - “Hernandez is our best player, a magician, shame he’s in his mid 30s.”
Thoughts on the Latics – “I’ve seen Wigan lots of times over the years as I work in Ormskirk, under Martinez they played some of the best football that I’ve ever seen.”

“The Sheffield Wednesday win must have been great for confidence, hopefully you can pick up enough points before the end of the season to stay up.”

You can catch Richard’s thoughts in full on this week’s podcast from 48:40 minutes on the embedded player below, a great and very knowledgeable guest, thanks for joining us this week, Richard.

Grab a listen to this week’s Latics podcast – which includes a preview of the Leeds game – by clicking on the embedded player below: 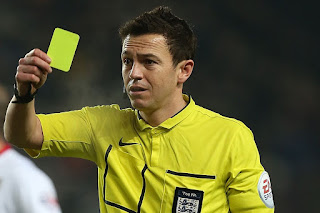 We are back in action on Saturday when Leeds United will be hosting the Latics at Elland Road, to ensure that the play is within the laws of the game Hartlepool referee Tony Harrington will be officiating.

Is it me or does Tony Harrington have a striking look of Andy Burnham?

Harrington, who is in his 7th season on the National List and part of the Select Group 2 professional officials, has been in charge of nine Latics games previously, though none this campaign, he last reffed us in our 2-1 away defeat at Derby in March last season.

This will be Harrington’s second Leeds game this season, he was in charge of the 3-3 draw with Cardiff City at Elland Road back in December when 10 man Cardiff came from three goals down to snatch an equaliser in the 88th minute.

Harrington began refereeing in the Teesside Junior Football Alliance at the age of 14, having completed a basic refereeing course whilst at school as part of the Duke of Edinburgh award.

After four years as an EFL assistant referee and four years as a National League referee, he was appointed to the EFL Referees List in 2012/13 and has now overseen more than 200 EFL matches.


Of Harrington’s 24 games this season 17 have been in Championship, the other’s spread between League1, League 2, the FA and the EFL cups.

Interesting fact - Tony is the Grandson of Tommy McGuigan, who is in the Hartlepool United record books for top 10 number of appearances and goals for the club.

Grab a listen to this week’s Latics podcast – which includes a preview of the Leeds game – by clicking on the embedded player below:

What A Difference A Win Makes - Latics 2 Sheff Weds 1 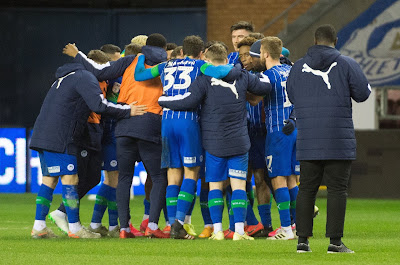 What a difference a win makes, we came off that ground last night absolutely buzzing, it was great to see the lads after the final whistle with the big ‘huddle’ out on the pitch and it was plain to see exactly what it meant to each and everyone of them, subs included.

On reflection the first half was pretty poor, we appeared to be laboured in our attacks and there were far too many long balls pinged in the direction of Kieffer Moore, aiming for his head or over his shoulder, Moore’s frustration was plain to see and he was crying out for the ball at his feet.

Sheffield Wednesday scored a very good goal, from their point of view, to get the scoring underway just after half an hour of play, Barry Bannan sent Morgan Fox away with a glorious pass down the left, Fox’s cross was met on the full by Jacob Murphy rushing in six yards out and the former Norwich man headed home.

The goal knocked the stuffing out of the Latics both on the pitch and in the stands where a deathly silence settled, half-time couldn’t come quickly enough.

The second half saw the Latics play with more urgency and balls directed at Moore’s feet, the big striker’s message getting through to his team-mates.

The equaliser before the hour, a move down the left involving Lowe and Dowell, the ball knocked into the box and Kieffer Moore found a bit of space behind the Wednesday defence and calmly slotted the ball home.

The final 25 minutes saw the Latics push for the winner and really had a go, when it came it was a glorious deft header from Jamal Lowe, following a flick on by Joe Garner, Lowe got himself beyond the far post and back headed delightfully over the Wednesday keeper and into the net, a Latics winner coming in the 88th minute, now that did feel good.

Full credit must go to all the players, their fight and determination led superbly by Sam Morsy went a big way to securing these three points and gives hope for the coming three months.

Man of the match was between Morsy and Kieffer Moore, who had his best game in a Latics shirt, but for his drive, commitment and fighting spirit I’d give it to Captain Sam, led by example and we will need that to get out of the relegation zone.

For more analysis of the game and a look forward to the Leeds match on Saturday tune into this evenings Latics Podcast , it will be hitting the airwaves around 9:30-10pm and should be a little more positive than of late.

We face Sheffield Wednesday tonight at the DW Stadium in what is surely a must win game. Six points and a five goal swing away from climbing out of the relegation zone it’s surely now time to throw the shackles off and go for it.

A seven game winless run at the DW is very worrying and this needs addressing, but again turning to the goals scored column, we are the divisions worst ‘home’ scorers with just 12 in 13 games, goalless in four of those games and scoring more than once in just two, Cardiff and Charlton.

Something needs to change.

Fortunately Sheffield Wednesday are in the midst of a bad run themselves, losing four of their last five Championship games and took an absolute drubbing off Blackburn – 5-0 at Hillsborough – last time out, though they do sit 10th and just four points off a play-off spot.

Latics will have both Kieffer Moore and Joffy Gelhardt available following injury and illness and it will be interesting to see if either or both make the starting line-up.

For Wednesday, Gary Monk will be hoping to turn cup form into League form and get back on the promotion trail. Serial Latics bogey man Steven Fletcher is out injured but transfer target Jordan Rhodes could get a rare run out for the Owls.

Monk has never lost a league game against the Latics and there’s never been a draw between the two clubs, interesting.

The referee for tonight’s game is David Webb, who’s been a lucky ref for the Latics down the years, you can get an insight on Webb with our ‘Meet The Ref’ article by clicking HERE.

Grab a listen to the Big Preview with Owls fan Kev Carpenter on this week’s Podcast, just click play below:

Latics face Sheffield Wednesday on Tuesday evening in what is a massive game in the course of the season, desperate for points we have old favourite, Lancashire based referee David Webb in charge of the proceedings. 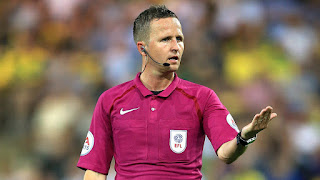 The 41 year old Sunderland fan has already been the whistle blower in two Latics’ games this campaign, both finished 3-2 in our favour, the opening day win over Cardiff at the DW Stadium and our only away win this season at Birmingham on New Years Day.

Webb took to officiating from the very young age of 14 because he was fascinated with ‘that side of the game’, says it all really, but he had to pack it all in after just one year, because he couldn’t get to the games and he was 20 years old before he was back blowing his whistle in the Wearside League.

Webb’s ambition is to make it all the way to the top and he hopes to become a Select Group 1 referee before too long, Webb says – ‘It’s everyone’s long-term aim to get in to the Select Group’

‘In any job, you hope to get as far as you can. You just knuckle down and work hard.’

David’s ‘other’ job was working for a charity that supports adults with learning difficulties and mental health problems, he says – ‘It’s very rewarding’

‘The man-management skills needed are not that different from refereeing. It’s all about building relationships – with the vulnerable or with the players. And I’ve found, very much so, that each job can help the other.’