The man charged with ensuring that Saturday’s game against Rotherham United at the DW Stadium is played in a fair manner is Northumberland official, Scott Duncan. 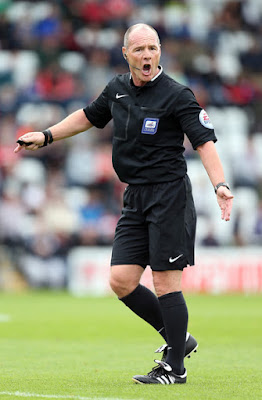 Duncan has been in charge of eight previous Latics games.

The Newcastle born whistle blower kicked off the 2015/16 season with us when we both traveled to the Ricoh Stadium on the first day of the new campaign, unfortunately we lost 2-0 to Coventry and had three players booked, Craig Morgan, Kev McNaughton and Cisco Junior, cheers for that Scott.

He made amends of a sort when we played Gillingham at the DW Stadium in January 2016, coming from two goals down we scored the winner in the 6th minute of stoppage time to take all the points in a dramatic finale, he did book both Max Power and Michael Jacobs, but he also did play on until we scored, so thanks there Scott, meant sincerely this time.

He was also in charge of our 3-0 demolition of Bury at the DW Stadium in the February of that campaign, though Craig Davies did find his way into the book that day.

The 2014/15 season saw Scott Duncan in charge of one Latics game, our away defeat to Bolton on the 7th November which signalled the end of Uwe Rosler’s reign as manager, he also had us twice in 2013/14, he was in charge of our trip to the Den back in December when we lost to Millwall, that day he issued two yellow cards Andy Keogh of Millwall and Latics defender Stephen Crainey, he was at the DW Stadium in March for our home win over Watford, booking Martyn Waghorn and three Watford players.

This is Scott Duncan’s seventh season as a Football League ref following his promotion to the National List at the start of the 2012/13 season. Of his 6 games so far this season three have been in the Championship, two in the EFL Cup and one in League 2

Latics travel down to Loftus Road on Saturday to face bottom of the Championship side QPR, the referee charged with ensuring that all is fair on the field of play is none other than Steve Martin, no not the Hollywood superstar, the other one from Stafford! 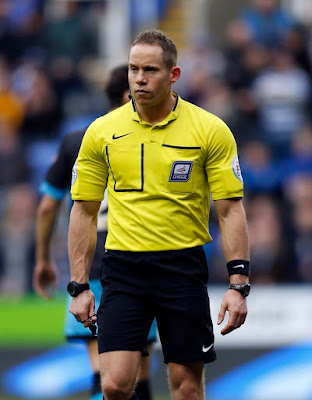 Martin is in his sixth season as a Football League referee, his first season was quite a calm one, in 27 games he issued just 54 yellows and the one red card without any major issues to report.

The apparently mild mannered official had just one Latics game last campaign, our 1-1 draw away at Bristol Rovers back in April, he didn’t book any players from either though that day.

Here’s hoping that this particular Steve Martin doesn’t act like ‘The Man With Two Brains’, isn’t a ‘Dirty Rotten Scoundrel’ or ‘The Jerk’ but does look back fondly at ‘The Three Amigos’.

That’s enough of that!


Latics take on Nottingham Forest this Saturday at the DW Stadium, the man in charge of proceedings is 36 year old Sunderland referee, Geoff Eltringham. 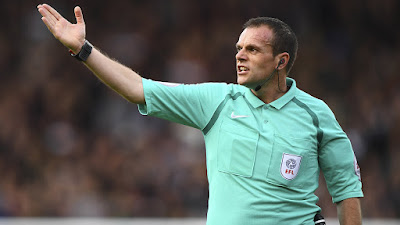 Eltringham has refereed a Latics v Forest game before, he took charge of our 2nd round Capital One Cup tie at the City Ground back in 2012/13 season.


Last season he only officiated one game which we were involved in, the 2-2 draw away at Blackburn.

Getting To Know You
Below is an interview with Geoff Eltringham by the Sunderland Referees Association, giving us a little insight into Saturdays whistle blower:

How where you introduced into refereeing?
After finishing playing school football, I didn’t think I would be good enough to make the step up and play at a decent standard, so I therefore chose to go down the refereeing route. I took my course at Ryhope Cricket Club under the leadership of Dave Binsley.

What has been the highlight of your career so far and why?
Lots of highlights such as officiating at Wembley, but promotion to the national list of referees was my overall highlight.

A target of mine when I first started refereeing was to be involved in Football League Football to some degree, so when I achieved it, it was very special.

I believe it is the low points that happen during your career, and how you deal and overcome them showing strength of character that ultimately makes you a stronger and better referee. Every referee will encounter low points from time to time.

What is the biggest game you have officiated and why?
My biggest game to date would be refereeing Nottingham Forest v Leicester City 2011/12, it was FA Cup 3rd round which gave the game a special feel. The game finished 0-0 with no major talking points which I was happy with.

What are your aims and ambitions as a referee?
My aim is to firstly retain my position then establish myself on the National List, which I feel after 3 seasons I’m starting to achieve.
My main ambition now is to referee at the highest level which would be the Premier League.

What/Who has been the biggest influence on your career and why?
Lots of people have had a big influence on my career, Malcolm Langley offered me the best piece of advice to ditch my beloved Sunderland season ticket, gutted at the time but I think it was the right choice!! At grassroots level I had good mentors in Ron Bates and Dick Madden. I have also worked with some great coaches on my way up the refereeing ladder including Phil Prosser, Matt Mattias and Alan Kaye, I’m currently working with Alan Wiley and Gary Willard who have been a great help with my development.

In your opinion who is/was the best referee?The best I’ve worked with are both current in Michael Oliver & Mark Clattenburg, but the referee who I used to look out for and admire was Paul Durkin, I thought he was a class act, maybe because we are similar heights!!!!
Interesting stuff

Latics travel over the Pennines on Tuesday to the New York Stadium where we will face Rotherham United in the Carabao Cup 1st round.

In charge of this game and traveling over the big hill with us is 36 year old, scouser Peter Bankes. 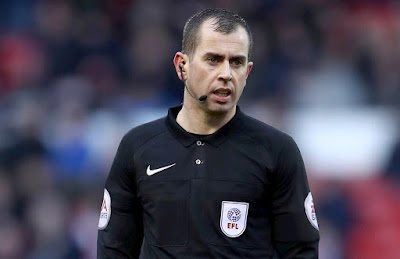 The Liverpool based official began refereeing in 1996, aged 14 whilst he was a pupil at Bootle High School, he was subsequently appointed to the Football League Referees List in 2014, prior to which he spent two years as a Select Group Assistant Referee.

During his time as an assistant ref (lino) our paths crossed in the most auspicious of circumstances, Bankes ran the line of our FA Cup Semi Final against Millwall in April 2013.

Bankesy is a former Accounts Manager.

At the tender age of 34 and with just two years experience of being the man in the middle Bankes was promoted to the Select Group 2 professional referees body, he must be regarded in high places, but so was Stuart Atwell, hopefully he will give a restrained performance on Tuesday, we don’t want the Millers using the referee as an excuse when we beat them.

In the interests of fairness I will leave a final word on Peter Bankes from ex Premier League referee and Middlesbrough fan Jeff Winter, following a Boro v Fulham game recently – ”For me, one of the league’s most promising young referees, Peter Bankes did nothing to harm his emerging reputation.

"His second visit to the Riverside showed him in total control throughout and his positioning meant he was always close to the action.”

The second podcast of the new season is now out, we are absolutely buzzing following what was a great game at the weekend, a five goal thriller, if the season carries on in this vein I for one will be delighted.

Why not grab a listen, gives us some feedback and if you want, add comments at the bottom of this article . 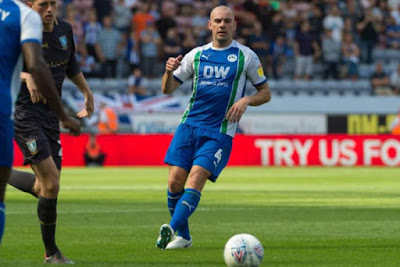 We recap a fantastic game of football against Sheffield Wednesday, five goals, loads of goal mouth action and a red card to boot.

The transfer window is getting ready to shut, we have the latest rumours.

Rotherham in the Caraboa cup on Tuesday, a quick preview and a discussion about the importance of this particular competition.

Once again thanks for your support

We’re off down the M6 on Saturday to Villa Park, the Latics will be looking to build on their great opening day win over Sheffield Wednesday, ensuring that both teams stick to the rules will be Carnforth official Jeremy Simpson. 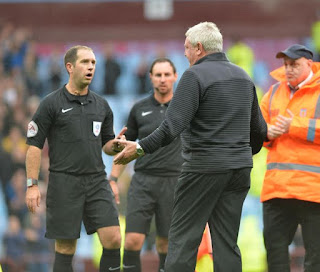 Simpson has a bit of history with our opponents Aston Villa, he felt the wrath of Villa boss Steve Bruce on two occasions, both at Villa Park, a red card against Bolton last September and some ‘dodgy’ decisions in a fiery game against Cardiff in April when he booked 9 players in total, 5 of which were Villa players.


A former Premier League and FIFA International assistant referee, Simpson is part of the ‘Select Group 2’ of professional ref’s after rising rapidly through the refereeing ranks, he was at Conference level in 2012 and only found his feet in the Championship in the 2015/16 campaign when of the 35 games he took charge of over the season just 15 were at 2nd tier level.

Last weekend he was in charge of the Sheffield United v Swansea game which finished in a 1-2 away win for the Swans, in the match Simpson awarded just 12 free kicks, allowing the game to flow, he didn’t  hand out a single card, a bit of a rarity these days.

Simpson took charge of two Latics’ games last campaign, both in the Football League Trophy, 1-1 draw away at Blackpool, which we won on pens and our 0-4 home defeat to Accrington when we fielded the under15s! 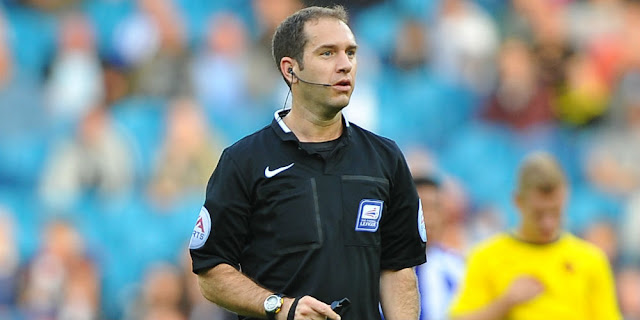 Don't forget to catch our weekly podcast available each and every Wednesday, news, views, reviews and other nonesense available on our podcast site:


The big kick off has arrived at last, the squad’s been tweaked – slightly – the friendlies played and optimism abounds, well in this part of Wigan at least, and why not.
Entering the new campaign on the back of a Championship winning season, with a settled squad, the big players still in place and most importantly the manager still at the helm. 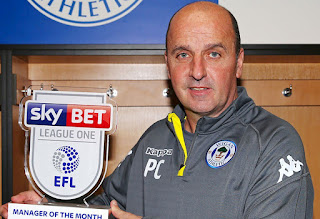 We showed last season that we can compete in the big games, the FA Cup run gives me the hope, nay the belief that we will be a much stronger outfit than the last time we were in the Championship, the spirit in the squad is fantastic and Paul Cook, whilst not suffering fools, has created an atmosphere around the training ground that players love being involved in. 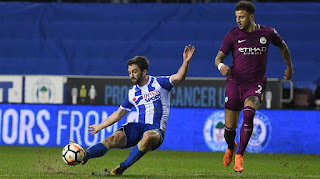 So I am going into the season with optimism, not false hope that we are going to smash it, but optimism that we will be at least competitive, I am looking forward to season without trauma or drama or any final day disappointments, I feel we have the ability to finish mid-table, keeping our heads well above the choppy waters of a relegation battle, we’ll leave that to the University of Bolton and QPR.

I am looking forward to Will Grigg having a good season, hopefully he’ll steer clear of injury and get his form up and running early. Dan Burn will also be a big player for us and I can envisage Jamie Walker breaking into the starting XI, he does look a real talent. 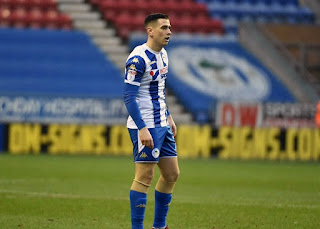 I’m excited about the season ahead, can’t wait for the takeover to be finalised, let’s get this party started.

The Incredible Progress With Unity Podcast


This is an advert