Latics and Blackpool meet at the DW Stadium on Tuesday in a League 1 fixture, taking charge of the game is Lincolnshire based referee, Darren Drysdale.


The 49 year old official is a sergeant in the RAF and currently based at RAF Waddington. So he’ll be used to handing out the ‘marching orders’ if any player steps out of line.

This will be the first time that Drysdale has refereed a Latics game since the 2017/18 season when he took charge of our first round FA Cup tie away at AFC Fylde, which ended 1:1. Although he has been to the DW Stadium previously this campaign, he was 4th official for our League 1 game with Oxford United back in November.

Drysdale last ref’d Blackpool in August 2019 when they defeated Oxford 2:1 at Bloomfield Road.

Wigan Athletic entertain Blackpool tomorrow (Tuesday) evening at the DW Stadium. The two clubs have met a total of 48 times down the years in competitive games with the Latics coming out on top with 21 wins and the Seasiders 17. 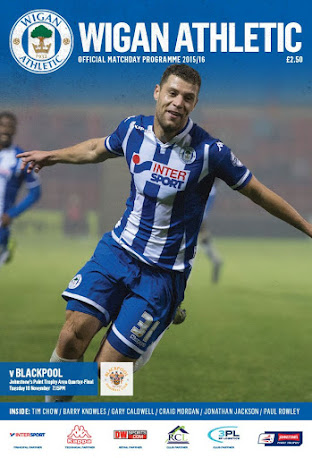 The first meeting came in an FA Cup tie in our second season as a Football League club, a Colin Methven goal in a 1:1 draw at Bloomfield Road forced a replay, four days later, in front of 14,589 spectators at Springfield Park, Frank Corrigan and Tommy Gore gabbed a goal apiece to send us through to the second round.

The last meeting was early this campaign, the Latics going down to a 1-0 defeat at Bloomfield Road.

Two games this week, both at home.

First up is a trip down memory lane to September 1988, an early autumnal evening at Springfield Park in front of 4,141. Goals from Neil Rimmer (pen) and John Butler gave Latics the points in this Division 3 fixture, playing for Blackpool that night was Latics Legend, Colin Methven and a young Steve Morgan who would sign for us 8 years later.

The second game is one, if being honest, I had forgotten about, but a classic none the less.

We go back to November 2015 for a Johnstones Paint Trophy game at the DW, a crowd of 5,224 witnessed the Latics put on a great display, add in some cracking goals and a bit of incident, well worth the entrance fee, Jordy Hiwula (2), Sean Murray and Yanic Wildschut on the scoresheet as we beat Blackpool 4:0

Wigan Athletic and Fleetwood Town have only met six times as Football League clubs, though we did come across each other during the non league days.


We have met five times in League 1, Latics winning four of them and drawing the other, we have also met earlier this season at Highbury in the League Cup, which of course we lost.

The stand out game this week is our first meeting at League 1 level, down at the DW Stadium in September 2015.

A crowd of 8,603 witnessed a 2:1 win with Jordan Flores on the score sheet with a screamer to claim his first goal for the club.

Michael Jacobs grabbed an early (47 mins) second half goal and Sanmi Odelusi hit an effort from 10 yards centre of the goal that ended up as an attacking throw-in for Fleetwood!