Carabao Cup time on Tuesday as the Latics entertain fellow League 1 table toppers, Sunderland, at the DW Stadium for a place in the last 16 and a possible date with one of English football’s big boys, the referee for the tie will be Freckleton lad, Leigh Doughty.


A relatively in experienced but highly thought of referee, Doughty has gone from refereeing in the National League back in May 2019 to the Select Group 2 of full time refs by the start 2020-21 season.

The 31 year old former PE Teacher has 58 games under his belt with 14 of those coming at Championship level. This will be his first visit to the DW Stadium and also his first Latics game. Doughty has refereed Sunderland twice before, January 2020 a 3:1 home win over Lincoln and last season, a goalless draw away at Northampton.

Doughty’s last game was Saturday’s Championship game at Loftus Rd, which ended QPR 1:2 Bristol City with four yellows for QPR players and one for Bristol City.

It will be interesting to compare the performance of a full time ref with the part-time ones we’ve been struggling with so far this campaign.

Latics and Accrington have only met on three occasions since Stanley gained promotion to the Football League in 2006. 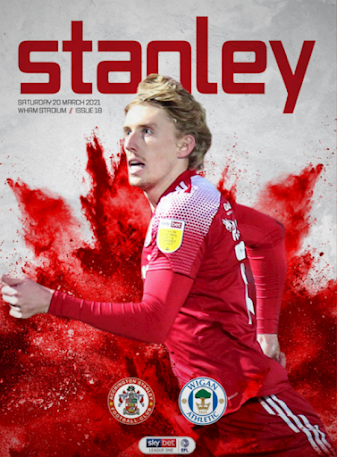 Two of those three came in League 1 last campaign, the home side winning on both occasions, Latics 4:3 at the DW and Accy 3:1 at the Crown Ground.

The third was back in November 2017 in a Football League Trophy game which saw a strong Accrington side demolish what was virtually a Latics youth team 0:4 at the DW. Adam Long and Chris Merrie both started the game, Tyrell Thomas was the only player aged over 20 in the Latics squad.

The Latics also faced Accrington in the Lancashire Junior cup, a semi-final tie taking place at Springfield Park back in 1978, played out in front of 911 spectators, we won that game 4:3, stalwart Ian Gillibrand netting the last of his six goals that he scored during his time with the club where he made over 420 appearances.

Thanks to Jeff Rourke for his encyclopaedic knowledge of the Latics.

Accrington and Wigan Borough FC met regularly during the lifespan of Borough, firstly in the Lancashire Combination 1920/21 season, then in the newly formed Division 3 North, from 1921/22 through to the demise of Wigan Borough in 1931.

Goals from Tom James, where he lost a tooth diving in at the far post, Dan Gardner and a Will Keane penalty put Latics three goals to the good by half time, Accrington made a strong come back in the 2nd half scoring two goals in four minutes, an own goal by Accy defender Hughes on 82 minutes settled the nerves somewhat, but only for four minutes as the away side scored again to set up a tense finish.

Latics travel up the M65 on Saturday to face Accrington Stanley in an early season high-flyers game, the referee will be Sunderland official, Andy Haines.


The 56 year old has a wealth of experience in the EFL, where he’s been blowing his since the 2007/08 season and so far, Haines has. clocked up 446 (four hundred and forty-six) games.

Haines was last in action on Tuesday evening this week, he was at Morecambe for their EFL Trophy game against Everton U21s, issuing just 2 yellow cards.

He has taken charge of four Latics games previously, all at the DW Stadium, most recent being our home defeat to AFC Wimbledon last season.

This referee has a Latics Love Factor of 66%

Doncaster Rovers are the visitors to the DW Stadium on Saturday, recent history favours the Latics in this fixture with four wins in the last four meetings. 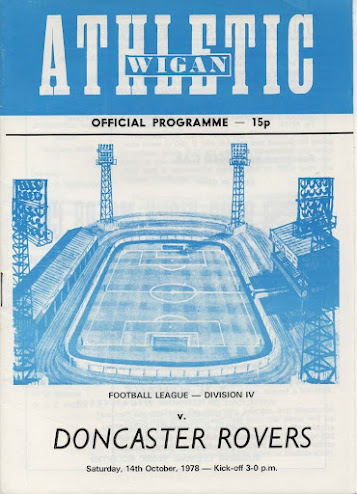 Our first ever meeting back in 1965 came in the 1st round of the FA Cup, a 2-2 draw over at Belle Vue saw the South Yorkshire men brought back to Springfield Park for a Wednesday afternoon replay.

Despite the game being played during ‘office hours’ a crowd of 7,113 witnessed a typical Harry Lyon performance, stretchered off in the first half with damaged ankle ligaments, the Latics number 9, following a tot of whisky, a woodbine and a hefty amount of strapping returned to the field of play and fired home a hat-trick to see the Latics through 3-1 and into the 2nd round.

Donny and the Latics have met 37 times down the years, we have 16 wins, with five of those coming in Doncaster and each one has been memorable. The first win was during our first season as a Football League club, 24 February 1979, a Jeff Wright goal was enough to give us the points and keep our outside chance of gate crashing the promotion places alive. Two of the other three were high scoring affairs, September 1982 Latics winning 3:6, the highest scoring game we’d been involved in at that point, skip forward six years to January 1988 and a thrilling 3:4 win at the old Belle Vue ground.

Latics have only lost twice in the league at home to Doncaster, both in the third tier and both in the 1980’s, 0:1 in April 1986 and a 0:3 whopping in January 1983, coming off the back of that 9 goal thriller at their place in the September.

Doing the double over Doncaster last season was an outstanding achievement, under the circumstances, we won the home fixture in early October courtesy of a 59th minute Joe Garner header, but the away fixture brought a top class performance from the Latics, who were missing Callum Lang with concussion.

Goals from Joe Dodoo, Thelo Aasgaard and Viv Solomom-Otabor had put the Latics firmly in the driving seat just past the half hour mark, despite Donny scoring a goal on the stroke of half time, the Latics continued to dominate the game in the second period and Will Keane’s 81st strike sealed the win and put the cap on a fine individual performance by Wigan’s very own Zidan.

The highlights are worth watching just for Keane’s contribution to the 3rd goal.

The Progress With Unity Podcast is a weekly Wigan Athletic fan talk show with news, views and (heavily biased) football opinion.
Catch us on twitter @PWUPodcast and, Facebook.