The Latics are back at the DW Stadium this week attempting to make it three wins on the bounce when local rivals Preston North End make the short trip down the M6.

The man charged with keeping the game flowing will be Barnsley referee, the aptly named, Darren England. 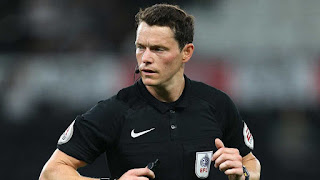 This is England’s fifth season as a Football League referee. 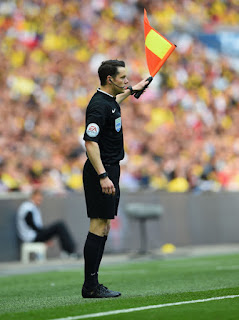 The 35 year old born and bred Barnsley man does have ‘big game’ experience, indeed his name should be very familiar with Latics supporters, cast your minds back to the 13th April 2013, Wembley Stadium, FA Cup semi-final, he ran the line as the Latics beat Millwall on the road to winning the famous old trophy.

England has been running the line for several seasons in the Premier League, he also ran the line the 2015 FA cup final between Arsenal and Aston Villa and he has experienced Champions League games and international matches, but he decided to swap the flag for the whistle and bowed out running the line in an international friendly between Norway and Sweden.

England says about his decision to become a ref – ‘I will miss being involved in Premier League and international and European games but the aim is to be back there as a referee one day. It’s short-term sacrifice for long-term reward. Being involved in the big games as a referee would be even better than running the line in them.’

Darren England is also a former academy coach at Barnsley FC, one of his former players there is current Everton defender John Stones, he also worked for Barnsley Community Trust before moving to the Football League Trust where he is employed promoting the National Citizens Service for teenagers.

Grab a listen to a preview of the Latics v PNE game on this weeks podcast, just click play on the embedded player below: