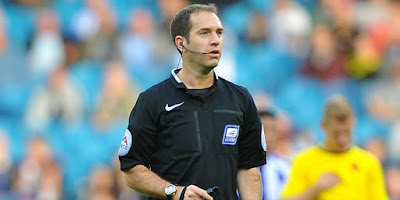 
A former Premier League and FIFA International assistant referee, Simpson is part of the ‘Select Group 2’ of professional ref’s after rising rapidly through the refereeing ranks, he was at Conference level in 2012 and only found his feet in the Championship in the 2015/16 campaign when of the 35 games he took charge of over the season just 15 were at 2nd tier level.

So far this season 17 of his 22 games have been in the Championship.

Latics related Fact(s):
Simpson was the referee when the Latics put out their virtual youth team against Accrington Stanley in the Checkatrade Trophy back in 2017, not surprisingly they got a bit of a thumping.

This referee has a Latics Love Factor of 11%

Grab a listen to this week's podcast which features a preview of Saturday's game with Millwall, just click play on the embedded player below.